General conference session will be in Room 3, followed by networking lunch in Room 4.

Global Councils Forum serves as the leading forum for bringing the financial community, its partners and providers together.

This thought leadership Forum is a free, invite only event, held on Sunday before SIBOS starts. This is an extremely popular and sought after event. Make sure to RSVP to guarantee your seat.

Who Typically Attends the Event

The event is a gathering of 100 senior executives and heads of transaction banking, trade, compliance, payments and/or innovation, and other thought leaders in the industry.

This is an invite only event with limited seats.

Registration for this event is closed. Mr. Rico Brandenburg is a Partner in Oliver Wyman’s Risk & Public Policy and Digital practices in New York. He has more than 10 years of experience in consulting to leading global organizations in the US, Europe, Latin America, and the Middle East across range of topics around cyber and operational resilience as well as broader non-financial risk management. In his recent work, Mr. Brandenberg focuses on designing risk frameworks, operating models, data and infrastructure capabilities to improve overall management of these risk types. Mr. Brandenberg also led the developed of SWIFT’s Counterparty Cyber Risk Management Framework in 2017/18. 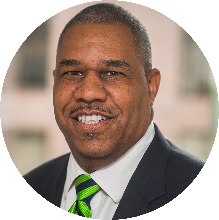 Tod Burwell is the President and Chief Executive Officer of BAFT. Prior to being promoted to CEO, he served as the Senior Vice President of Trade Products with oversight of all trade-related initiatives including the Global Trade Industry Council, Trade Committees, and other strategic initiatives of the organization. Mr. Burwell has nearly 30 years of trade, supply chain and cash management experience as a banking practitioner, as well as serving as a consultant to global corporations and suppliers of strategically integrated trade solutions. Prior to joining BAFT, Mr. Burwell was a Managing Director at J.P. Morgan Chase and held senior global management roles responsible for trade operations, launching the logistics business and managing global product sales for trade finance and logistics management. Alisa DiCaprio is the Head of Global Trade Strategy at R3 in New York City. She joined from Asian Development Bank where she was a senior economist working on digital trade, trade finance and innovation. She has also worked in both the public and private sectors on export promotion, trade negotiations, and labor issues. Her PhD is from MIT, and she holds a BA and MA from Johns Hopkins University. Mark Garfield’s current role is Head of Global Financial Institutions at Zions Bancorporation responsible for foreign bank relationship development. He joined Zions Bancorporation in 2005. He has over 30 years of banking experience with 25 years in international banking management covering trade finance, trade services, foreign exchange, correspondent banking and product development. Throughout his career he has worked closely with corporate and commercial entities in the Midwest and Western U.S. providing banking support for cross-border trade. Mr. Garfield currently serves as a Director of BAFT and Chair of the Utah District Export Council. He served on the DEC National Advisory Board and Board of the World Trade Center, Utah. Dr. Rebecca Harding is an independent economist specialising in trade and trade finance and CEO of Coriolis Technologies, providing data as a service to the trade and trade finance space. She is the co-author of the acclaimed “The Weaponization of Trade: the Great Unbalancing of Policy and Economics" and “Gaming Trade: Win-Win Strategies for the Digital Era.” She frequently appears on Ian King Live, Sky News, BBC World and BBC Radio 5 live, Newsnight and Radio 4 and is cited in the Broadsheet press, including recent articles in the Financial Times, Telegraph and CityAM, and citations in the Telegraph, the Times and the New Scotsman. She is a regular guest anchor on CNBC’s Squawk Box. She has written 11 books and over 200 academic articles and public policy reports. Ms. Shannon Manders is the Editorial Director of GTR, the world's leading international trade finance publication. She is also a freelance financial journalist, editor and editorial consultant with 12 years of experience reporting on and producing print and online publications on the global trade and trade finance sector. Ms. Manders has extensive experience in moderating discussions, both at GTR’s own conferences and at a range of other top industry events hosted by the likes of the ICC Banking Commission, the World Bank’s International Finance Corporation, SWIFT (Sibos) and the Commonwealth Business Forum. She regularly covers stories from international locations, and has hosted numerous roundtable discussions and webinars. Ms. Manders was awarded “Best Trade Editor” in the 2019 TFG International Trade Awards. Mr. Jason Maude is a coder, coach, and public speaker. He has over a decade of experience working in the financial sector, primarily in creating and delivering software. He is passionate about explaining complex technical concepts to those who are convinced that they won’t be able to understand them. He currently works at Starling bank as their Chief Technology Advocate and host of the Starling podcast. Mr. Mark McNulty is the Global Clearing and FI Payments Head, taking on this role in November 2014. In this role, Mr. McNulty is responsible for the continued growth, development and transformation of the FP Payments product set, developing strategies and execution plans to deliver on the potential of this business while continually enhancing the client experience of the Financial Institution segment. Mr. McNulty also leads the gpi iniative for Citi. Previous to this, Mr. McNulty was the EMEA Clearing and FI Payments Head based in Dublin. This role entails managing High Value Clearing across EMEA for Corporate, Public Sector and FI clients with specific focus on our European Clearing offering to Bank and FI Clients. Mr. Julio Lopez Moreno is the Chief Information Security Officer (CISO) of CIB and Client Solutions areas at BBVA. He has been working at BBVA for the last 19 years, holding several managing IT positions in the Corporate and Investment area. Before this long period, he was working as Investment Banking IT manager at Deutsche Bank. BSc in Physics, he has a degree in Treasury and a Master in Private Security and is member of ISACA, holding the CRISC certificate. Suresh Ramamurthi is Chairman of CBW Bank and serves as its CTO as well. He leads CBW Bank’s initiatives to support and foster innovation including working with financial services start-ups. A veteran technology entrepreneur, Suresh has founded and exited two start-ups, and has previously worked at Google Inc. Suresh has a Bachelor’s degree in Electronics and Communication Engineering, a Master’s degree in Computer Science and a Master’s degree in Business Administration from the University of Chicago. Mr. Michael Vrontamitis is co-chair of the ICC working group on the digitisation of trade and a member of the ICC Banking Commission Advisory Board and World Trade Board. In his most recent role Mr Vrontamitis was responsible for Standard Chartered’s trade finance business with European and American headquartered companies as well as the business across sales, product, service and implementation in Europe and the Americas. He was also a member of the BAFT Global Trade Industry Council and BAFT board. He has also previously chaired the SWIFT Offshore CNY Best Practice Working Group – Cash & Trade Group and in 2014 he was recognised by The Asset as The Renminbi Banker of the Year in the Industry Achievement Awards of the Triple A Treasury, Trade and Risk Management Awards.